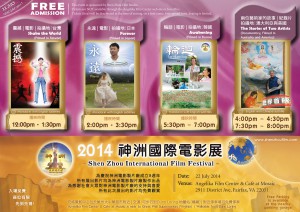 On July 22nd, Shen Zhou International Film Festival was held at the Angelika Film Center. Four films, including movies and documentaries, about cultivation stories of Falun Gong practitioners were shown. The first movie “Shake the World” revealed the brutal persecution of Falun Gong practitioners who cling to their beliefs and stand up for their convictions in mainland China. The second movie “Forever” tells the true story of a young practitioner’s mental and physical changes after practicing Falun Gong. However, he was killed one day before his wedding, leaving behind his grieving fiancée and parents.

“The movies are so touching. I’ll watch all of the four movies today.” Said Mr. Shengyue Li from Dalian, China. “Both the two movies are inspiring for my family. I’m not a Falun Gong practitioner, but my wife is. We clearly know that this persecution is indeed true and has been happening for 15 years.”

After carefully watching “Shake the World” and “Forever”, Mr. Li commented, “A movie is a combination of artistry and authenticity. These movies did a good job on both of these two aspects. I was very excited when I watched the movies. The performance of these actors and actresses has the sense of reality. The plot is abstracted from real stories. That’s what makes the movies profound and touching. Though I’m not a cultivator, I find the movies very educating. ”

A happy and proud smile surfaced on his face when Mr. Li talked about his wife, “To let more people know about Falun Gong, she volunteers in front of the National Air and Space Museum every day and gives out flyers and brochures to tourists. I fully support what she does. To save her time, I cook meals and take over other kinds of housework. Before she practiced Falun Gong, she suffered badly from rheumatic heart disease and was hospitalized multiple times every year. Her knees were swollen like steamed bread. Through Falun Gong practice, the diseases are gone. She became healthy ever since, which is beneficial to the whole family. Now we are all very grateful to Falun Gong. ”